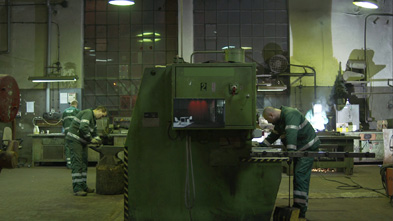 ?You know what - this whole ?common ground? category scares me. It must be conceived from the position of someone? - I don?t know - an allegorical film director, an engineer ? someone outside the frame, designing the potential encounter.? Daniel Kötter?s single take film Neues Theater, based on a performance staged in November 2011, examines a moment of fundamental change in the understanding of public space in post-communist Poland. The workshop hall of the Warsaw city cleaning company MPO will turn into the new cultural centre for Poland?s most internationally renowned theatre company Nowy Teatr, the work of the workers will be replaced by the work of actors and viewers. While the camera slowly travels along the hall, the roles of viewers and actors, of labour and performance, practice and theory keep oscillating. The film stages the ?theatre? itself, not as yet another art form (with its specific institutional conditions, market rules and local aesthetic and historic limitations), but as a name for the allegoric space of encounter.

Daniel Kötter, born 1975, is a director and video artist whose work oscillates deliberately between different media and institutional contexts, combining techniques of structuralist film with documentary elements and experimental music theater. It was shown in numerous galleries, video festivals, concert halls and theatres all over Europe, in New York, Mexico, Tehran and Lagos. Between 2008 and 2011, he developed the video- and opera-performance trilogy Arbeit und Freizeit. His music theatre performances in collaboration with composer Hannes Seidl are shown at international festivals such as the Venice Biennale, Musica d?hoy Madrid and others. Kötter`s new series of installations, films, and discursive work on urban and socio-political conditions of performativity has been under development since mid-2010 under the title state-theatre: Lagos/Teheran/Berlin/Detroit/Beirut/Mönchengladbach (with Constanze Fischbeck). For galleries and dance performances, he developed multi-channel live video delay installations. His award-winning short-Film Film für übers Sofa (with Hannes Seidl) was shown at festivals worldwide. Between 2002 and 2008 Daniel Kötter, as artistic director of the labor für musik:theater, developed and produced numerous feature-length performative projects and multi-channel movies on the borderline between concert and musical theater. Daniel Kötter has been living and working in Berlin since 1996.