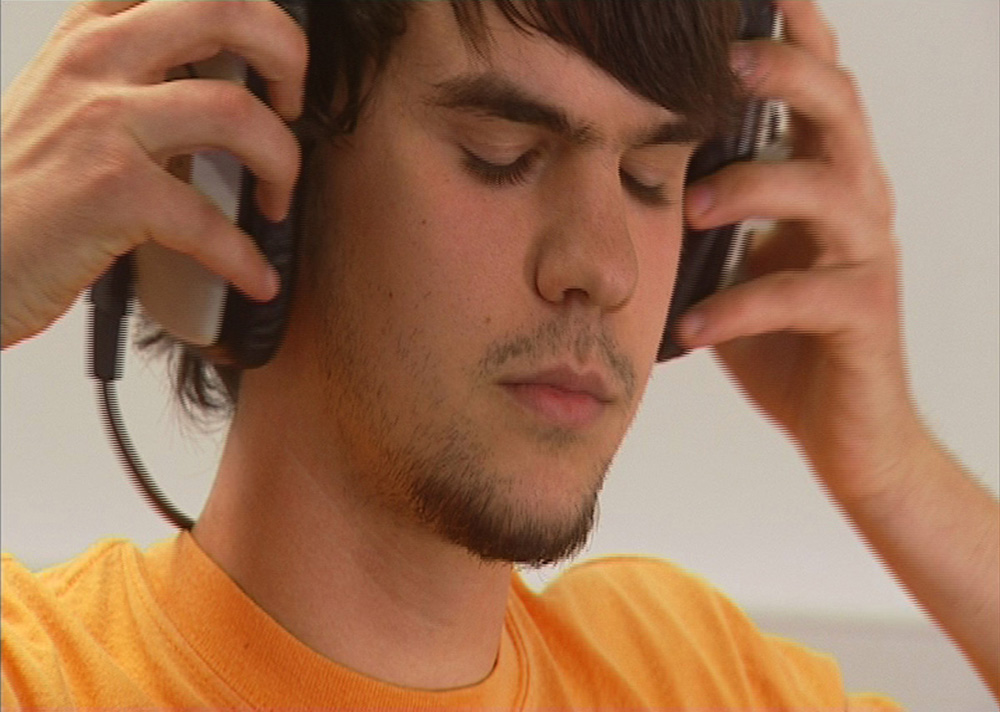 For the 19th letter of its alphabet, MOVING_IMAGE proposes an exploration of different worlds of sound sound worlds. Direct, indirect or off-camera sounds, noises, voices, music and silences become the tangible reverse of images. the tangible reverse side of images. 5 rare films and videos that question the paradox of our perception. With the exceptional screening of "Herman Slobbe, l'enfant aveugle n°2", one of the strongest, most accurate by Johan van der Keuken, as well as works by Miranda Pennell, Daniel Kötter and Daniel Kötter, João Salaviza, Kasper Akhøj and Tamar Guimaraes

Miranda Pennell : Drum Room | Video, digibeta, colour, 15'05'', United Kingdom, 2007 [without dialogue] The empty spaces of a building open up to reveal musicians practicing together, alone. Miranda Pennell films the silence, the sound production and the sound experience in the process of happening, both subjective and and collective experience of sound in the making.

Miranda Pennell lives and works in London. As a photographer and video maker, her work focuses on aspects of a collective performance. Her work has been shown at the Tate Modern, the Centre Pompidou and the Reina Sofia National Museum.

Daniel Kötter : Communal Retreat | Fiction/documentary, hdv, colour, 15', Germany/Canada, 2012 [VOST French] In the footsteps of Glenn Gould, Daniel Kötter makes his "Solitude-Trilogy", and questions what a community in a peripheral what a community in a situation of periphery might mean. The film explores the different modalities of sound appearance in the continuity of a narrative.

João Salaviza : Strokkur | Documentaire exp., hdv, noir et blanc, 7’16’’, Portugal, 2011 [without dialogue] João Salaviza physically faces the thermal shock of a geyser gushing at regular intervals from a fault in Iceland plunging into the depths of the Earth. He experiences the phenomenon with his body and his technical tools, amplifier, microphone and camera.

João Salaviza lives and works in Lisbon. In 2009 he won the Palme d'Or for short film at the Cannes Film Festival. His films have been screened at the Rotterdam International Film Festival Pompidou Centre, the Venice Biennale and the Berlinale.

Johan Van der Keuken is one of the greatest modern documentary filmmakers. Through some fifty films, he has films, he has masterfully explored the boundaries between the subjective, the singular and the universal. Exhibitions of his work have been held at the Centre Pompidou, the Jeu de Paume and the Stedelijk Museum. Retrospectives of his work have been presented, notably at MoMA in New York, the Centre Pompidou and the Cinémathèque française.