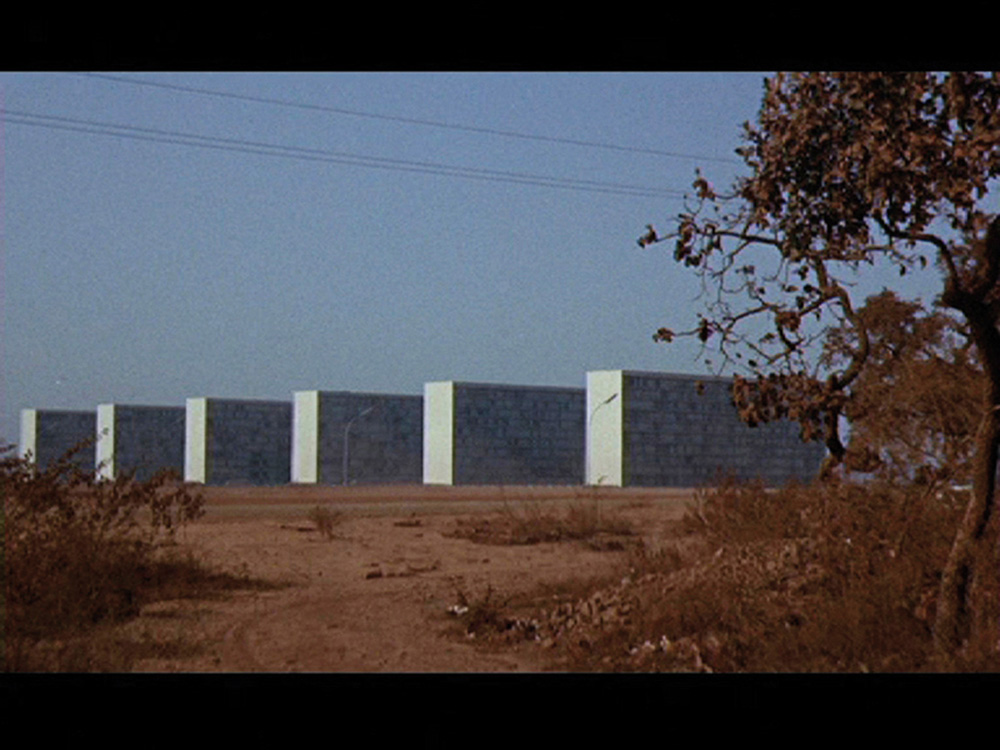 For the 21st letter of its alphabet, MOVING_IMAGE questions the notions of public space and urbanism. With films and videos by Ferhat Özgür, Jakob Gautel, Guillaume Linard-Osorio, Filipa César, Romana Schmalisch and Jean-Luc Vilmouth. Urban planning shapes our daily movements, inscribes the most diverse ideologies or utopias into space and the arrangement of materials. How do moving images question urbanism today?

Ferhat Özgür : I can sing | Video, colour, 7', Turkey, 2008 [VOSTEN] Against a background of buildings under construction, a veiled Anatolian woman sings a lament. Her lips move. But the soundtrack of the video is "Hallelujah", a classic by Leonard Cohen covered by Jeff Buckley.
Ferhat Özgür lives and works in Istanbul. He is interested in the phenomena of urban transformation and gentrification through the study of survival strategies and rituals. His work has been exhibited internationally, most recently at the Berlin Biennial and the Istanbul Biennial and at MoMA PS1 in New York. His work is now part of the collections of museums such as Centre Pompidou and the Museum of Modern Art in Salzburg.

Jakob Gautel : Ville nouvelle? | Experimental documentary, colour, 23'13'', Germany / France, 2010 [VO French] Fifty years after a commissioned film on the new district of Les Buis, Jakob Gautel has made a "mirror-film", projected opposite the first one. a "mirror film", projected opposite the first one, opposing the old images with views of the of today's district, dilapidated bars or those destined for demolition, but also of the social life of the district, mixed of the neighbourhood, mixed with views of the film's spectators, taken during three public screenings of the film, organised by the MJC.
Jakob Gautel lives and works in Paris. He experiments with art forms outside of conventional spaces and and participates in numerous exhibitions in galleries, museums and art centres. His work has His work has been exhibited at the Musée d'Art Moderne de la Ville de Paris, at the Biennale internationale d'art contemporain de Melle, and and at the Studio national des arts contemporains du Fresnoy.

Guillaume Linard-Osorio : Os candagos | Video, colour, 8'10'', France, 2010 [without dialogue] Guillaume Linard-Osorio questions the history of urban utopias by putting into perspective the images of an adventure film the images of an adventure film, "L'Homme de Rio" by Philippe de Broca, made in 1963, some of which which some sequences were shot in Brasilia, then under construction, with the story of its builders, deprived of the possibility of a social ascension because they were relegated to the fringes of the city. city.
Guillaume Linard-Osorio lives and works in Paris. His work questions the notion of project and the the role of deconstruction and construction processes in the representation of reality. He has been exhibited at the International Design Biennial in Saint Etienne, at the Centre Pompidou the occasion of the Nuit des Musées and at the Musée d'art moderne et contemporain de Genève.

Filipa César : Porto, 1975 | Documentary, colour, 10', Portugal, 2010 "Bouça" was a social housing project designed by the architect Álvaro Siza in 1973, shortly before the end of Salazar's Estado Novo. the end of Salazar's Estado Novo. Work was halted just after the 1975 putsch, resumed in 1999 in 1999 and was completed in 2006. The place is now called Oporto. A long sequence plan through the urban complex, courtyards, staircases, a flat, and stops at an architectural office set up where it should have been agency set up where there should have been a crèche
Filipa César lives and works in Berlin. Her work explores the fictional aspect of documentary practice practice, and questions the political significance of moving images. Her work has been exhibited at the Contemporary Art Gallery in Vancouver, the Tate Modern in London, the Venice Biennale Venice Biennale.

Romana Schmalisch : Weg zum Klub | Video, colour , 11', Germany, 2007 By collaging Soviet buildings from the 1920s with films and audio recordings from the late 1930s, Romana Schmalisch and audio recordings from the late 1930s, Romana Schmalisch confronts the early avant-garde with the avant-garde with Stalin's megalomaniac plans. The film examines the image of Moscow as it was reported by the media at a time of definitive and radical political and social change. radical political and social changes.
Romana Schmalisch lives and works in Berlin. She has developed several projects at the confluence of theory and film, questioning cinematic representations and the representation of historical processes and social structures. Her work has been screened and exhibited in museums and art centres, including the Palais de Tokyo, the Foundation for Contemporary Art Kiev and the National Centre for Contemporary Arts in Moscow.

Jean-Luc Vilmouth : White Building | Documentary, colour, 25', France / Cambodia, 2005 Invited to Phnom-Penh, Jean-Luc Vilmouth was seized by the existence of a building that an assistant of Le Corbusier, the Cambodian architect Vann Molyvann, built in the sixties on the site of the Le Corbusier's assistant, the Cambodian architect Vann Molyvann, built in the 1960s on the utopian model of the utopian model of the Cité Radieuse. The inhabitants moved into this building, albeit unfinished, and the unfinished, and transformed it. Life took over, as did the local customs.
Jean Luc Vilmouth lives and works in Paris. Through sculptures, installations, videos and performances or performances, Jean-Luc Vilmouth questions our relationship to the object and its place in our daily environment. His work has been exhibited at MoMA PS1 in New York, the Centre Pompidou Centre and the Palais de Tokyo.